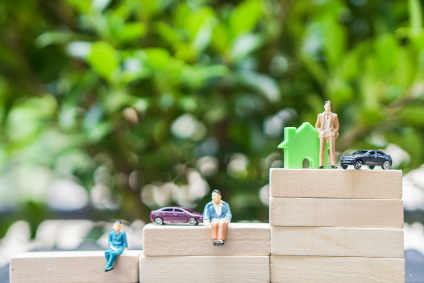 The question of socio-economic inequalities, its forms and its mechanisms appears burning news in French Guiana where social fractures are exacerbated. Indeed, in 2011 according to INSEE, this is the French territory where taxpayers who pay the Tax on Fortune (ISF), are on average the richest in France. In contrast, French Guiana has the largest number of poor people, with over 60% of the population living below the poverty line. These glaring inequalities are superimposed on an ethnic and geographical stratification. Most of the inhabitants of the interior of the territory are black Maroons or Amerindians and they compose, with the foreigners of last generation (Surinamese, Brazilians, Haitians), the most precarious part of the population living in Guiana (Carde, 2009). On the contrary, the inhabitants of the littoral, in partivular those of the island of Cayenne, have on average higher economic resources. Although the process of creolization (Glissant, 2009) is not interrupted, the idea of “community” build boundaries between groups. These economic and geographical tensions are combined with gender inequalities. In 2014 according to INSEE, the gap between the unemployment rate of women and men in Guiana is the highest of France. And when they have access to employment, fewer women are in high-paying, socially-responsible positions. Thus, establishing, for the first time, a dynamic mapping of the multifaceted socio-economic disparities of the French territory of South America is in the general interest.